[Vol.501]
“Housing Poverty” on the rise for young singles in Seoul 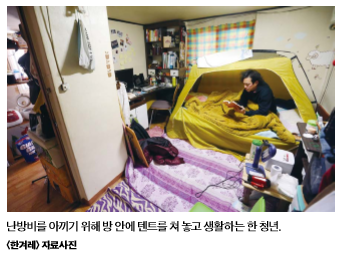 Around four in ten young Seoulites living on their own occupy housing that fails to meet minimum residential standards, a study shows. While the overall housing poverty rate is in decline, the situation has become steadily worse since 2000 for young single-person households.

On Oct. 9, the Hankyoreh and the Hankyoreh Economy & Society Research Institute obtained figures from the Statistics Korea Statistical Research Institute through the office of Democratic Party lawmaker and National Assembly Strategy and Finance Committee member Park Kwang-on. The analysis, which focused on 2015 census data on young households living in basement or rooftop residences and residences failing to meet minimum housing standards, showed a total of 290,000 households headed by a person aged 20–34 falling below minimum housing standards, or 11.3% of all households nationwide.

Among Seoul’s districts, the rate was highest in Gwanak at 42.7%, followed by Dongjak at 30%, Seongbuk at 29.3%, and Dongdaemun at 25.8%. The rates were particularly high in Gwanak and Dongjak, which are home to large numbers of tiny one-room “gosiwons” in the Sillim and Noryangjin neighborhoods. Among young single-person households in Seoul, the number of households occupying gosiwons and other “non-housing dwellings” has risen steadily from 2,818 in 2005 to 22,644 in 2010 and 38,906 in 2015.

“The housing poverty rate for young single-person households in Seoul has differed from the overall trend for South Korea, where a large supply of apartments has led to a reduction in the housing poverty rate,” said Korea Center for City and Environment Research senior fellow Choi Eunyoung.

“This kind of reversal was never seen at all with other generations,” Choi commented.

Im Gyeong-ji, head of the non-profit organization Mindalpaengi Union, explained, “In addition to the high rate of occupancy in gosiwons and other non-residential dwellings for young single-person households lacking the resources to pay a security deposit, these households are also vulnerable to housing poverty while occupying illegal structures built around universities.” “There needs to be oversight and monitoring of illegal structures and failure to meet minimal housing standards,” Im said.